Microsoft Surface tablets have created quite a lot of buzz when announce couple of months ago due to the built-in kick-stand and touch cover. Not much was known about it back then but now Microsoft has finally placed it in their online store for pre-order along with all the accessories and pricing and a video ad. The entry-level model with 32 GB of internal storage starts at £399 the same as the new iPad 16 GB.

Now some may think that at this price point most people will rather go for an iPad or Android tablets due to the enormous selection of quality apps but the Surface will come with Office 2013 pre-installed which Microsoft hopes will be enough to draw in the masses. Not to mention a microSD card slot and a full size USB 2.0 port. 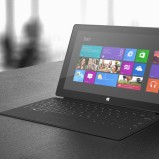